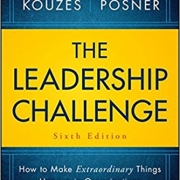 When Mike Abershoff took over the USS Benfold in 1997, he was not taking on an easy task. Ranked as the 3rd worst ship in the Navy, the USS Benfold was plagued with low morale, high turnover, and a total lack of trust in the command structure. Crew members did their time on the ship and then departed, often leaving not just the ship, but exiting the Navy. This may seem like the norm for a volunteer force, but the backbone of the military consists of tenured mid-level officers and non-commissioner officers leading day-to-day operations. Without these positions being retained, the cost of replacing staff on the Benfold grew exponentially.

Commander Abershoff was lucky enough to serve on Secretary of Defense William Perry’s staff and attributes many of the leadership lessons he learned to Secretary Perry’s coaching. In his book, It’s Your Ship, you will find a story of almost every one of the practices and commitments from the Leadership Challenge. The one that stands out for me was Enable Others to Act.

Commander Abershoff knew that if he wanted a level of excellence above and beyond what the Navy had experienced in the past, he had to start doing things from a different perspective in the future. One of the first things he did was free his crew from “top-down-itis,” the idea that all good ideas come from the senior officers.

His desire was for his crew to “own Benfold;” i.e. to take personal responsibility for, and to take pride in the ship. He started this process by developing trusting relationships with his staff. Instead of eating with the officers as tradition dictated, he ate with the enlisted men and women. He would walk the deck asking sailors how they thought the ship could improve. He would try anything as long as 1) it did not put someone at risk of death and 2) he could find a way to put it into his budget. When things did not go as planned, he ensured that the crew learned from their mistakes. He encouraged calculated risk taking and constantly asked for new ideas on how to improve.

One of the most demotivating tasks for new sailors was painting the boat. In the late 1990’s, a team of sailors would start at the front of the ship and paint towards the rear. It would take a month to paint the ship. The sailors were rewarded for their efforts by starting over the next month. Every ship in the Navy at sea was painted every other month. Until, that is, one of Commander Abershoff’s sailors challenged the process. During an interview one of his sailors asked a simple question. “Why do we use ferrous metals in every bolt, nut and screw used to connect the steel on the outside of the boat to the structure.” Ferrous metals rust, especially when exposed to salt-water. As a result, the bolts would rust and drip down the boat creating further corrosion.

This sailor asked a simple question: “Have you ever heard of stainless steel?” Commander Abershoff went on the hunt for stainless steel parts, invested $25,000 in retrofitting the Benfold, and reduced the required painting to once per year.

With the extra time sailors had time to attend college for their personal growth and the crew had the time to train increasing their readiness scores. Another sailor brought up the idea of flame spraying the deck. The process included baking the metal to remove impurities and then painting it with rust inhibiting paint. As a result, the crew never had to paint the ship again during their tour.

Once a few people were successful, the ideas came pouring in. Commander Abershoff’s response was always the same: “It’s your ship.” By giving his crew the freedom in choosing how they did their work; by encouraging calculated risks; and by supporting the decisions his staff made, he increased morale, lowered turnover, and in the end, was the recipient of the Spokane Award for being the best ship in the Pacific Fleet.

While most of us will never command a destroyer, many of us will lead others who have insight into how we can improve. As we move into positional leadership roles, we often lose touch with daily operations. We forget the challenges line employees face and with limited perspective cannot accurately identify, let alone solve the ever-growing list of challenges. Creating an environment of trust; effectively listening to staff; and giving people freedom in solving their challenges enables our teams to grow, improve, and moves our organizations forward to a more competitive place in the future.

About Michael: Michael Curtis has 30 plus years in public service including a stint in the United States Air Force and over 23 years with the Texas Department of Family and Protective Services. He is a Certified Master Facilitator nd Coach of the Leadership Challenge and serves in his local church as the Director of Adult Education.  Michael has been married to the love of his life, Patty, for almost 4 decades and has one son, Matthew.